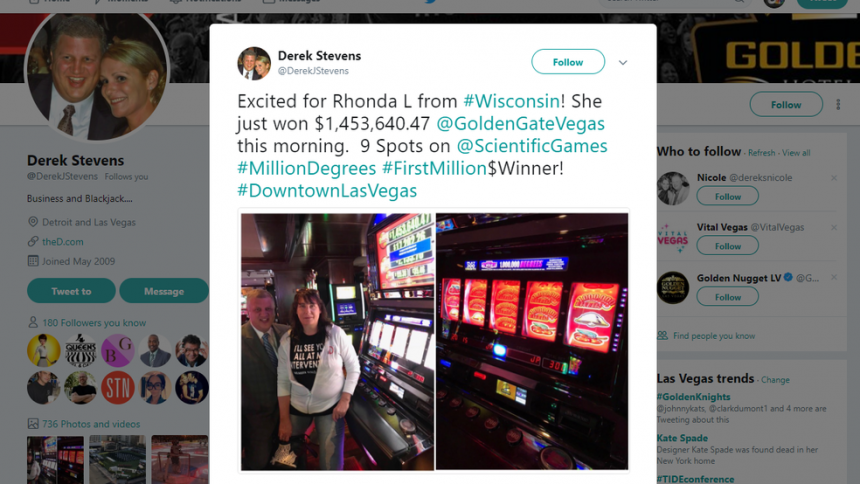 At the start of June, just over a week ago, there was an astonishing story of a Wisconsinite’s good fortune. That is to say, this Wisconsin woman hit the jackpot at Vegas. Now, as we all know, it’s not everyday when we see amazing jackpot wins and this story is truly a heart-warming one for gambling fanatics. Let’s take a look at the key moments of this story.

Now, for those of you who aren’t fully aware of it, there are two types of casinos. The traditional land-based ones with Las Vegas the land of milk and honey, and there are the online casinos. With different games, atmospheres and bonuses, we recommend all you newbies to taste the best of both worlds. Onto our now famous Wisconsin woman, she left Las Vegas a millionaire.

Wisconsin Woman Hit the Jackpot at the Golden Gate in Vegas

The Golden Gate Hotel is located in Downtown Las Vegas where this Wisconsinite, Rhonda L., decided to spend some time at following a recent trip to Sin City. Playing the Million Degrees game in the early hours of June the 5th, Rhonda had hit the 9 spot totalling her earning to around $1.45 million.

Now that’s some large sum of cash. Before finding out the first things she did with her prize money, we advise you to check out the latest online gambling news. Over there, you will also find similar stories of major winners playing online games.

‘The Largest Pay-out in the Property’s History’

After the jackpot was won, the Chief Executive Officer of the casino, Derek Stevens took to Twitter to discuss the big news. Stephens said that the win was the largest jackpot that he had seen awarded within his career. To be more precise, the owner of the Golden Gate property stated the following:

“She is a big fan of the D and Golden Gate, so we really couldn’t have asked for a better winner,”

“This is the biggest pay-out of my career in Las Vegas and our lucky casino player has made the experience unforgettable.”

This amazing story now concludes with a indirect morale message being sent. The Wisconsin woman who hit the jackpot was there despite only being in the area for a bingo tournament. And far be it from bingo, she tried her luck at something she wasn’t committed to and her good fortune complimented her back. This just goes to show that sometimes the risks turn into pay-outs with Rhonda L. as a prime example.