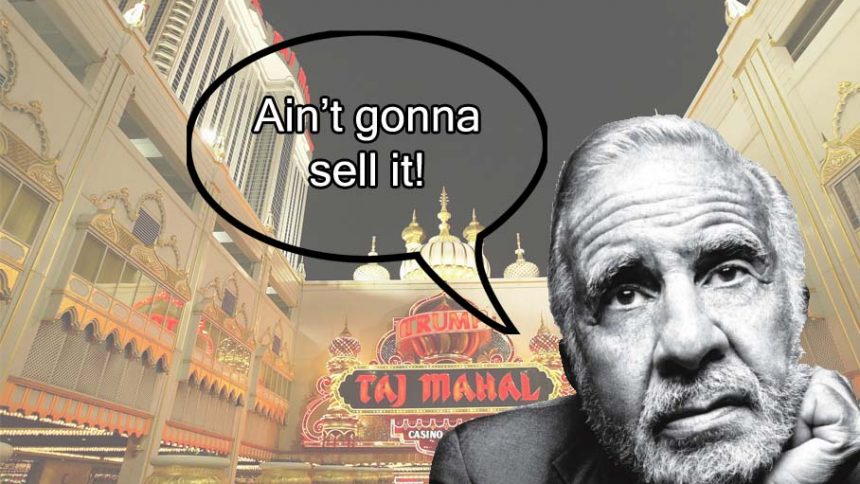 Carl Icahn: Trump Taj Mahal Casino is not For Sale

President-elect Donald Trump’s special adviser and billionaire investor Carl Icahn has declared that the famous Atlantic City gambling hub Trump Taj Mahal Casino is not for sale although it shut its doors on the 10 of October last year.

Trump Taj Mahal Casino shut its doors in last October; however, it is still a topic of hot debate. The famous Atlantic City casino had operated for 26 years under the ownership of the president-elect of the USA Donald Trump and his current special adviser Carl Icahn.

Trump handed the business to his buddy Icahn after the casino went bankrupt. Icahn let Trump Taj Mahal survive two more years until the 10th of October, 2016 when the casino was shut down for good. The 80-year-old investor did not want to give in the demands of the union that asked for better social security for the workers.

This is what happened to the legendary Trump Taj Mahal Casino Atlantic City in a nutshell. Now what will happen to this luxurious casino and hotel resort located on the boardwalk of Atlantic City?

It seems like Carl Icahn doesn’t want to re-open the casino despite the rumors he might consider this option in spring. He is aiming to turn in the gambling license of the casino so that the next owner cannot use the building as a casino without paying a certain amount to Icahn. Apparently, this option is more profitable for the billionaire investor than re-opening the casino. In a statement Icahn stated that “We are not looking to sell [Trump Taj Mahal Casino], not today’s prices. I made my fortune buying things cheap.”

Although Icahn and the Republican Governor of New Jersey Chris Christie will be working together in Trump’s administration, they have been in a serious clash due to Icahn’s decision of closing Trump Taj Mahal Casino. As a matter of fact, the number of Atlantic City casinos is in decrease for the last 3 years leaving many locals unemployed and reducing the gambling income of the state drastically. Five big casinos have closed their doors since the beginning of 2014 leaving only 7 operating casinos in the gambling hub of New Jersey. The remaining casinos have witnessed increasing revenue due to lack of competition; nevertheless, the gambling income of the state has been on a declining trend.

The liberal New Jersey online gambling laws have attracted the top online casinos for USA players. However, the offshore gambling sites have the biggest share of the pie leaving less tax and license income to the state. Therefore, the brick and mortar casinos are still vital for the state.

The state legislature passed a bill last month which prevents casino owners from obtaining casino license for five years after closing a casino in Atlantic City. This bill applies only to Carl Icahn currently. It definitely means war. The bill was created by state Senate President Steve Sweeney who is also a workers’ union official.

Icahn blamed Sweeney for scaring investors away waging war against an important investor as himself. “When a guy like Sweeney goes after someone who saved the Tropicana and 3,000 jobs when no one else would, who would invest in New Jersey?” Icahn asked. Future of Trump Taj Mahal Casino remains uncertain for the time being. However, Icahn’s political influence is expected to increase immensely once Donald Trump stars his career as the President of the USA.

According to New York Magazine, Icahn is richer than all the other billionaires on Trump’s team put together. Considering the fact that he is Trump’s top adviser, he will be able to influence the lawmakers to pass laws which will be the best for his investments. However, for now Trump Taj Mahal Casino is not for sale, drifting in like a bottle in an ocean with letter hidden in it which will disclose the fate of the once-magnificent gambling destination.