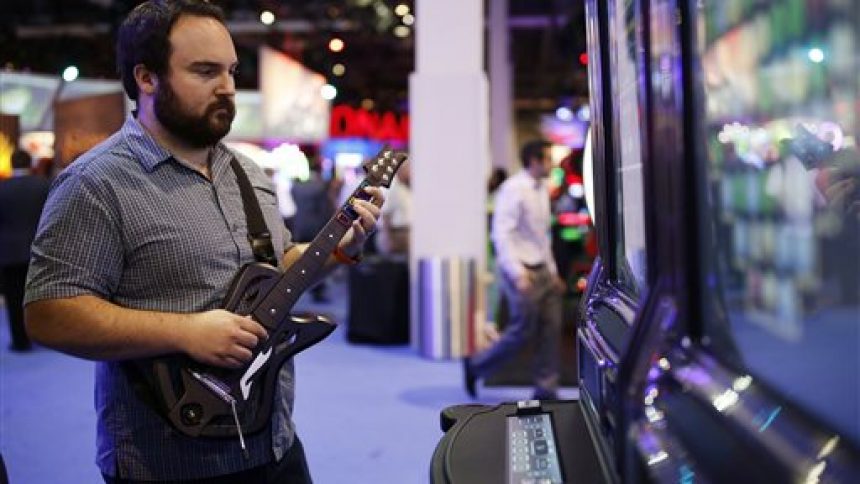 The new generations will soon be able to partake in video game gambling as old school casino toys do not appeal to them.

What kind of games do you automatically think of when picturing a casino in your head? One of the first things that will immediately pop up will most likely be a roulette wheel or the ever-present green tables that are so widespread in casinos. The next thing on the list of things you might think of are slot machines, and after that all the rest of the games available.

All of these gambling options are traditional and can offer a great time…if you’re above the age of 45. However, considering that casino revenues have been down for some time, gambling firms have been forced to think of new ways to attract players, namely those that are under 25. And now they will try to appeal to them by offering video game gambling, whereby players will have the chance to play a video game and thus use their skills to overcome obstacles and earn money along the way. Sounds fun, right?

Video game gambling is a hot new proposition for casinos

Video game gambling is not new, as there are a large number of eSports and similar events that offer prize money to gamers that clinch the top spot in the respective game. However, when it comes to land-based casinos, players can mainly find traditional games that have been around for decades, so video game gambling could very well be implemented as part of the new offer.

CBS News reports that casino revenues in Las Vegas decreased almost 5 percent in August, which only once again reaffirms the need for new gaming innovations. Macau has surpassed Las Vegas as the gambling capital of the world over a decade ago – an achievement that they have accomplished thanks to offering a wide variety of games for their players, although neither they have video game gambling as part of the overall offers.

Millennials are in search of exciting games

Ben Tracy, CBS news reporter, stated that casino slot machines are still the biggest earners for the casinos in Las Vegas (60% profit-margins). This statistic is pretty impressive, however the problem with this is that the younger generations are not attracted to slot machines, as the core group consists of players above the age of 45. He also said, “so the future of gambling could look a lot less like this (pointing to a slot machine), and a lot more like an arcade.”

Gregg Giuffria is the head of G2 Game Design, which was one of the companies that showcased their products at the gaming expo in Las Vegas recently. He argues that the new generations are not attracted to the old school games, but rather look for more exciting options that will give them provide them with great entertainment along with money. “Forty-five and under are not going to play slot machines. They’re just not. We’re going into a brand new world,” Giuffria said.

He highlighted that he wants to offer casino players the chance to actually utilize their skills to earn money – a fact that is absent from roulette and slot machines, as players purely rely on luck. “I want to turn a casino into where you have a fighting chance to earn some money. Use your skill, race the car, shoot a target.” He also continued by stating, “They’re going to all change. As your base gets older and evolves, you’ve got to be prepared for the next generation coming in.”

And the generation that he is referring to are the millennials – people that were born after the 1980. This target group is well aware of video games in today’s age, so it makes sense to make video game gambling available at casinos. The Las Vegas Convention and Visitors Authority reports that only 63 percent of the millennials that visited Sin City last year gambled. That is in stark contrast to the generation above them, that consists of 51-69 year-olds – 78 percent of which gambled, while 87 percent of 70-90 year-old also played the tables at Las Vegas last year.

There is wide support for the introduction of video game gambling

The chief marketing exec of gambling provider Gamblit, Darion Lowenstein, suggested that casinos need to adapt their gaming offers if they are to attract millennials in through the doors. “Younger people come to Vegas for nightlife, for clubs, for partying, for dancing. For all the great things Vegas is known for – but really no longer for gambling.”

Giuffria and Lowenstein are not alone in their forward thinking. Chairman of Nevada Gaming Commission, Tony Alamo, also stressed that video game gambling is the way of the future for the casino industry. “We’re now treading into new territory. And again, we’re trying to attract a different generation. They don’t play poker or blackjack, but they play arcade games.” Suggesting by the all the support for new gaming technologies, players should expect to see video game gambling hit casinos pretty soon…