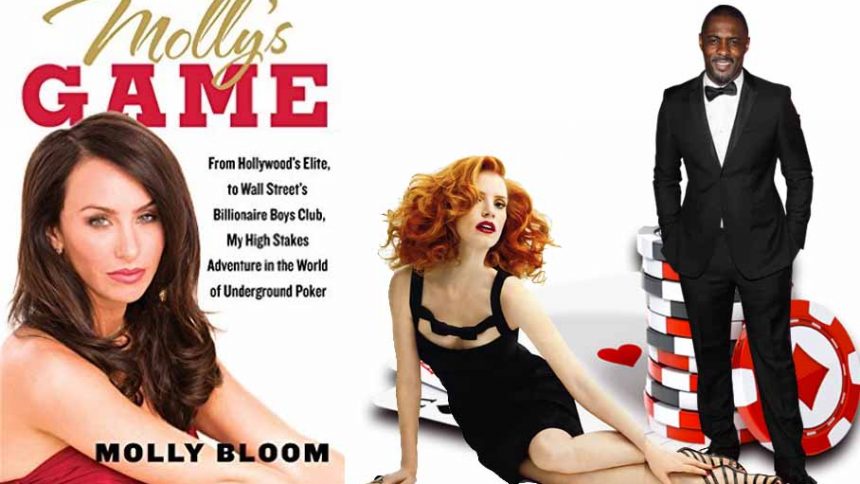 According to US online poker news, Aaron Sorkin’s directorial debut is expected to be huge since in his recent poker movie Jessica Chastain, who has two Oscar nominations, and Golden Globe laureate Idris Elba will co-star. The two Hollywood figures have never been paired up before.

According to Sorkin “the casting of Jessica and Idris in the two lead roles is any film-maker’s dream come true. They are two of the greatest actors of their generation, paired for the first time, and their chemistry will be electric.”

Sorkin’s recent poker movie Molly’s Game is a biopic about “the Poker Princess” Molly Bloom who enjoyed a lavish lifestyle thanks to the poker parties she threw. She organized super luxurious poker parties for eight years and among her frequent visitors there were such prominent names as Matt Damon, Ben Affleck, and Leonardo DiCaprio.

Former skier Poker Princess enjoyed the wealth obtained through hosting Hollywood stars and other celebrities for 8 years. However, FBI finally busted her. The bill of hosting illegal poker parties in Hollywood was heavy as she was fined $125,000 and sentenced to a year’s probation.

Jessica Chastain will play the role of Molly Bloom while Idris Elba will be seen as the lawyer of the Poker Princess. These two actors’ performances will have a vital importance in carrying the recent poker movie into the list of Top 10 Gambling Movies.

It is a matter of wonder whether the story of the illegal high stakes games of Hollywood stars can be strong enough to find a place among the best poker movies ever. However, there is one thing which is sure that the story will attract many poker fans to movie theaters all over world.