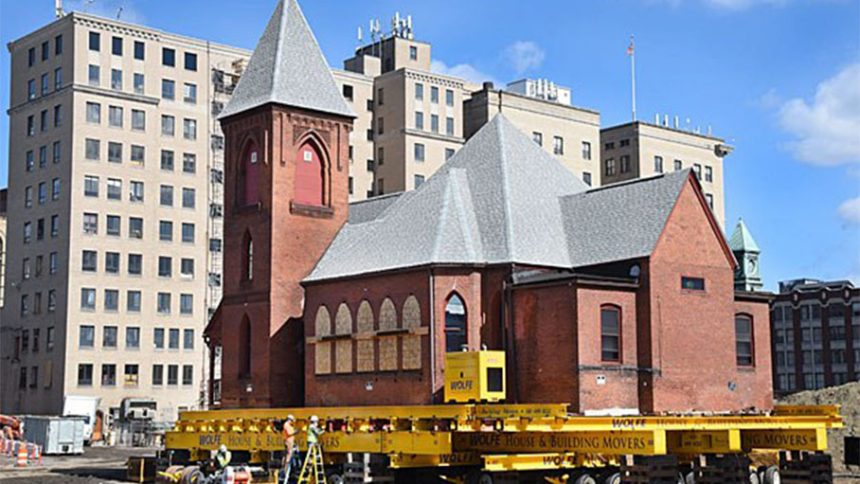 A historic church in Springfield is being moved few blocks away in order to make way for the MGM casino project. The First Spiritualist Church is 129 years old and being relocated from Bliss Street to Union Street in order to prepare the foundation of the MGM casino.

A historic Massachusetts church started slowly rolling along the street Tuesday to make place for a nearly $1 billion casino. Probably you understand the shock felt by the locals as you may never imagine seeing a moving church on the street.

Making this story more colorful, and even funny we can’t ignore the expression used by Domenic Sarno, Mayor of Springfield. He labelled the memorable relocation of the church as a Holy Roller, as the 68-foot tower has been moved along the streets and frankly, his description is more than appropriate.

The church was built in a Victorian Gothic style previously known as the French Protestant Church. Later, the Protestant congregation left the place and the church was taken over by the First Spiritualist Society in 1919. It became a registered member of the National Register of Historic Places in 1983.

However, the spiritualists have also left the church in 2013, and the new ‘owner’ of the church has not been decided yet, but at least we know the new location of it.

The MGM casino project in Springfield, Massachusetts is a $950 million worth casino investment. The opening date of the building is due in 2018, constructed and owned by MGM Resorts International, the Nevada based gaming and entertainment company. The casino’s gambling floor will be at the same place as the church was before. Generally, we can say the MGM project will hit the jackpot, if it manages to move historical places physically. And it’s just the beginning.

If you are curious to know the next steps of the MGM casino project, follow our online casino news section and learn more about these peculiar stories of the industry.