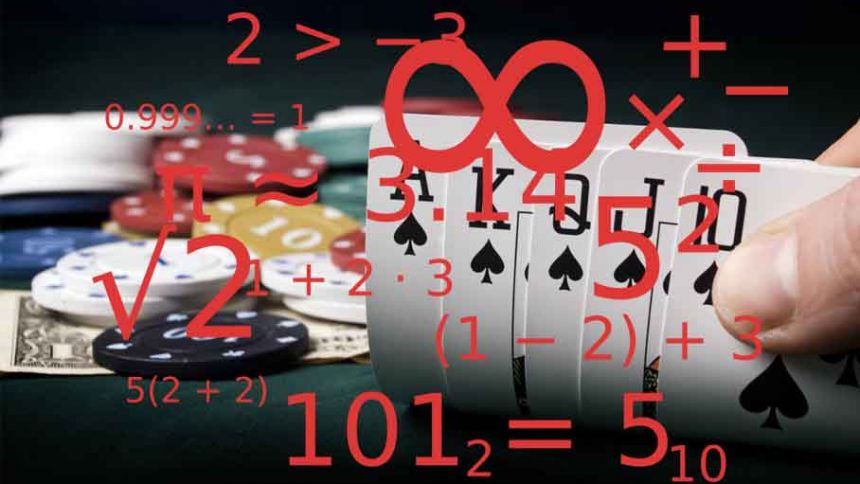 Do you know that Mathematics behind gambling – should we say gambling behind mathematics to be fair? – has had a huge impact on many scientific explanations? From the theory of probability to chaos and game theories, many scientific ideas stemmed from gambling related activities.

Most people tend to focus on the negative sides of gambling while talking about the impact of gambling related activities. However, there is something important that they do not know: mathematics behind gambling is also the ancestor of many scientific breakthroughs.

According to online gambling news in the UK, Mathematician Adam Kucharski’s book The Perfect Bet: How Science and Maths Are Taking the Luck Out of Gambling has been released recently. The Guardian published an article in order to give some insight regarding the topics covered in the book. Here are some example of how the mathematics behind gambling should be read as gambling behind mathematics since gambling helped science in many ways:

If you have read Adam Fawer’s popular book Improbable, you already know what the Probability Theory is. This theory is a ubiquitous element in life as we can talk about odds in every part of life. Be it celebrity dead pool betting odds, Formula 1 Russian Grand Prix betting odds  or the odds of you will have 3 major illnesses in the next 2 years, we live among odds. But there is system in every probable happening which likelihood of which can be calculated beforehand.

Italian physician Gerolamo Gardano thought that two dices could land in 36 different ways; however only one of these coincides with two sixes. So the odds of getting two sixes are 36.00. Many people would explain this phenomenon with the pure luck. Nonetheless, Gardano’s studies showed that you can calculate how lucky or unlucky you can get as a result of a certain bet.

Probability Theory is important since many business and scientists calculate their probable success through this method.

Problem of Points Explained by Tossing a Coin

Adam Kucharski explains this problem with the example of Antoine Gombaud who asks famous mathematicians Pierre de Fermat and Blaise Pascal to solve a problem regarding a coin tossing game. He asks that suppose you are tossing a coin with a friend, the first to win six tosses scoops £100. However, the game stops when you are leading 5-3. How do you split the money?

Here we have odds again. Your friend needs three correct tosses to get ahead and win the bet. The chance of managing this is 1 in 8; so you win the other 7 games. So you get 7 while he gets 1. It resembles fortune telling as it is all about predicting or assuming the future.

This method is essential for investors who calculate the value of an investment for each party involved in the investment process.

Nothing is Coincidence – Chaos Has an Order

Mathematician Karl Pearson analyzed the regularly published roulette results of Le Monaco newspaper in the 1890s. He realized that this numbers were not actually as random as he thought. He noted that if the Monte Carlo roulette had continued since the birth of earth, the last two week’s game wouldn’t have occurred even once before. Because there is obviously no man made system to repeat a pattern as there is a perfect natural system which keeps things from reoccurring.

Scientists at CERN use this method while calculating the chance of obtaining a result as a consequence of their experiments. They calculate the probability of their test theory before they actually start experimenting.

By the way, there was a striking point in Karl Pearson’s story. Le Monaco journalists made up most of the numbers since they were too lazy to record every spin in the casino. However, the value of Pearson’s research is still high.

You can still play online roulette in the US and keep your own record if you have the time and patience.

You Take Insurance due to the St Petersburg Lottery

St Petersburg Lottery theory is based on a simple game. One of the parties toss a coin until heads first appears. If heads appears on the first throw, then he pays the other player £2. If it appears on the second throw, he gives £4 and the prize doubles every time he fails to throw heads. So now the question is, how much would you pay him to play this game with you?

This question explains the basis of the insurance sector. According to mathematician Daniel Bernouilli, this situation can be explained via the concept of utility. The less money a person has, the less they would like to risk on the small chance of a huge payoff in a bet. That is why we pay small monthly installments to insurance things of greater value.

A roulette ball is thrown on the wheel in the same way every time. However, predicting the exact number and the color that the ball falls into is quite a difficult task. Nevertheless, it is not arbitrary since there is a system even in chaos. The angle and the speed of the ball effect the outcome significantly. If you know the speed and the angle of the ball, you can actually predict the outcome. In other words, sensitive dependence on initial conditions can alter and determine the outcome of an act immensely as it is claimed by the chaos theory.

Mathematics Behind Gambling can Surrender to Simplicity from Time to Time

Sometimes science depends on drills rather than mathematical equations. It is the same for gambling as the mathematics behind gambling can prove nothing better than simply playing and observing.

US Online gambling laws have always taken a loose attitude towards solitaire, simply because it is not even gambling. But it is one the kind-of-gambling types that helped science to send a badass spacecraft to the moon to find a new planet to colonize as there is no more suitable place on earth anymore.

In 1940s, mathematician Stanislaw Ulam decided to calculate the probability of getting a winning hand while playinh a sort of solitaire called Canfield. Instead of calculating the odds through a long and dreary mathematical process, he decided to put the cards in front of him and play several times to see the results.

Ulam’s method proved useful eventually as the scientists of the Los Alamos National Laboratory in New Mexico used this method which they called the Monte Carlo method to study nuclear chain reactions. They decided to use this method instead of traditional mathematical reasoning not because they are lazy but because Ulam’s method actually saves a lot of time.

Hungarian-American mathematician John von Neumann realized that reading the poker game wouldn’t be enough to win. The more important issue was reading the mind of the opponent. Although this may sound like a crazy idea, today’s artificial intelligence technology relies on this idea. There is mathematics behind strategy and decision making as their mathematics behind gambling. If you want to know more about this issue, you can watch Ron Howard’s Oscar laureate movie A Beautiful Mind.

Liked this article? Take a look at the latest online gambling news! Don’t embark on a gambling adventure without checking our online gambling guides. You can also follow our latest gambling tips and news on Twitter and Facebook.
Tag Adam Kucharski chaos theory gambling probability problems game theory Mathematics behind gambling mathematics of gambling The Perfect Bet: How Science and Maths Are Taking the Luck Out of Gambling