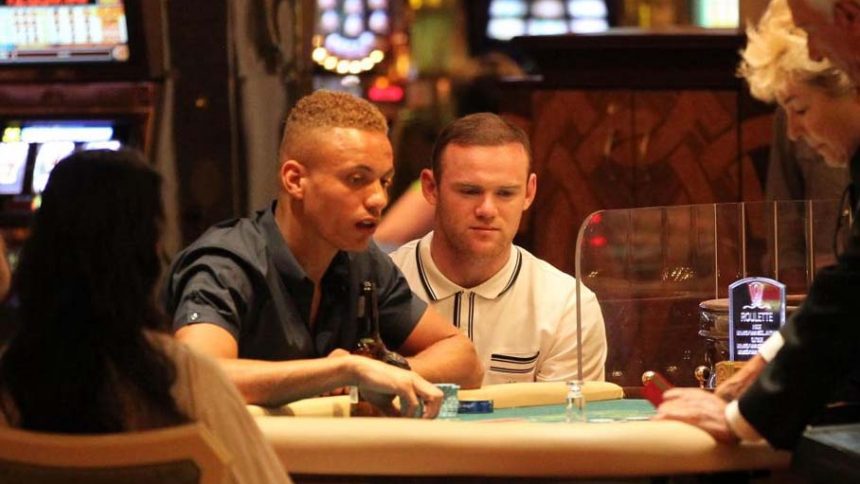 Manchester United striker Wayne Rooney gambled away £500,000 in only two hours when his wife Coleen was away with their children. He seems to be on the way to join the celebrities who lost everything in gambling.

The English football star Wayne Rooney gambled away half a million quid according to the latest gambling news. United striker tried his chance on roulette and blackjack and lost £500,000 in two hours. He seems to struggle to achieve not only on the pitch but also in gambling. Jose Mourinho’s student made 22 Premier League appearances this season and scored only four goals. Rooney lost his spot in the starting 11 to Marcus Rashford due to his poor performance.

It seems Rooney aims to recover his self-confidence on roulette table in vain. According to The Sun, the United striker arrived the 235 Casino alone at midnight after United’s Europa League game against FC Rostov on March 16. Rooney watched the game from a box at Old Trafford due to his injury.

It appears that Rooney wanted to celebrate his team’s victory alone at a casino in Manchester. According to a witness, he directly head to the VIP area of the casino where he is usually treated as a special guest. The witness claimed that he kept gambling on red and drank cans of beer; but he didn’t seem drunk and focused on his gambling.

The witnesses stated that Rooney left the casino around 2 am after losing around £500,000 in just two hours. The famous footballer went on a gambling spree when his wife Coleen and their children were away. He previously admitted that he had a clash with his wife when he lost £50,000 on gambling early in his career.

Stories about compulsive gambler celebrities are not uncommon. There are many public figures that lost huge amounts on gambling. One of the solutions to compulsive gambling is playing online casino games. Legal online casinos are regulated by gambling commissions and inspected by anti-gambling addiction organizations. You can read our detailed article about the advantages of online gambling.