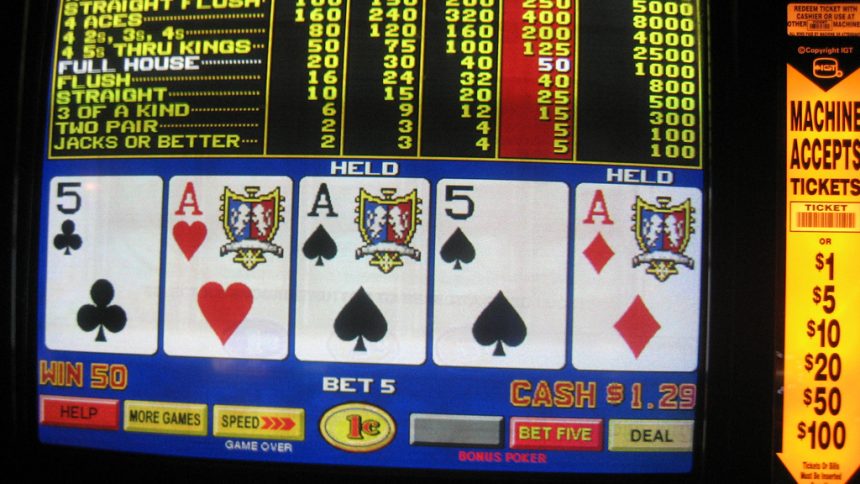 What Exactly is Video Poker?

While most slot machines are based on random numbers, allowing everything to play out to chance, video poker is one of the few casino machine games that actually favor the player.

Video poker is a game that requires skill and can often be used to bridge the gap between table games and slot machines. Video poker machines come with a much lower house edge than the slot machines, are easy to play and our video poker for beginners guide will tell you exactly how.

Video poker is not dissimilar to standard poker, in that you get dealt 5 cards and you want to get a good hand in order to win. The main difference is that you’re playing against the computer and not a group of players, so it’s much simpler in that you’re not raising any bets and so on.

The rules of video poker are not dissimilar to standard 5 draw poker. The machine will deal five cards, and you have the option of drawing up to five new cards, or hold the ones you’ve been dealt.

When you hit the “deal” button, the new cards will be dealt, discarding those not held. Whether you win or lose depends on the final hand you have after the draw button and the pay out depends on the ranking on the hand and the payout offered by the machine.

The basic rules of video poker are not difficult, but in order to play well, and just like in draw poker, you have a hierarchy of hands that determine your winnings. The order of the hand value is given in the table below, running from high to low from the top:

Even though you’re not playing against anyone else and there is no need to bluff and read other players, to get something out of the game it’s recommended that you use mathematical strategy to get ahead. However, this will depend on the game you’re playing, since Jacks or Better and Deuces Wild will vary in the mathematics applied to the game. You can find a number of strategy charts for each game to help you play well. There is also software that can train you to play like a pro.

If you’re used to slots, the video poker will feel like a dream. It’s not difficult to master, and the odds are definitely stacked more in your favor than slot machines. To get the most out of your video poker play, try these tips and tricks.