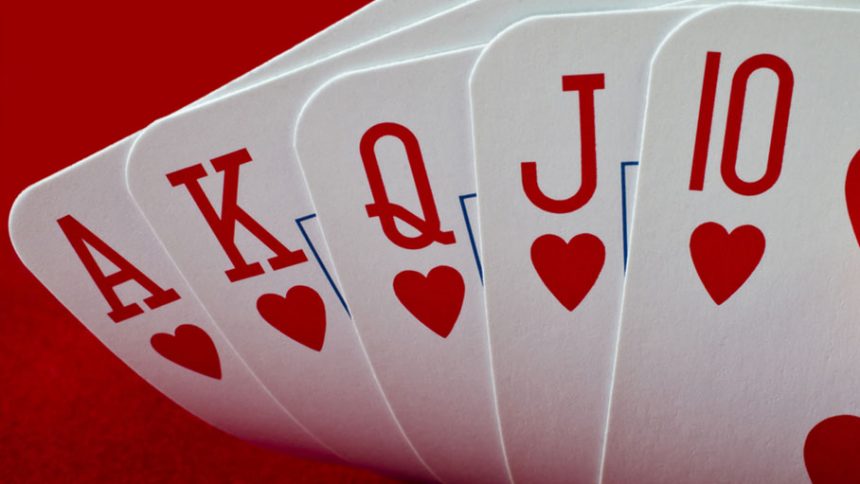 Hearts for Beginners Explained in 5 Minutes

Today, I’m going to talk about how to play Hearts for beginners in an article that shouldn’t take you longer than five minutes to read.

You win in Hearts by having the least amount of points by the end of the game.  Each Hearts card counts for 1 point. This is why the game is called Hearts. The Queen of Spades counts for 13 points. In other words, your objective is to get rid of all the hearts and of the Queen of Spades, if you have it.

Hearts is typically played by 4 people, although 3 to 7 players can play as well, and requires a deck of 52 cards. Each player is dealt 13 cards. The game ends when somebody reaches 100 points, which is when the player with the least amount of points wins.

At the start of the game, the players must select 3 cards to pass to one of their opponents. In the first game, you pass to the opponent on your left. The second, to the one on your right. The third, you pass across the table. There is no passing in the fourth game.

To begin the game, the player who has the Two of Clubs has to play that card to start the first trick. Players must follow with a card of the same suit. If they don’t have one, they can put down another card. Whoever puts down the highest card wins (takes) the trick. The player who wins the trick then leads the second round, and so on, until all the cards are played.

You can only play your hearts when you have no other cards of the leading card’s suit. And remember: you’re not allowed to play a heart or the Queen of Spades on the first trick.

Before you can lead with a heart, a player must have played a heart on a trick because they had no card of the leading suit. This is called “breaking the heart.”

Sometimes you may find that you have a lot of hearts and the Queen of Spades in your hand. That’s when you can try to take all of the penalty cards (13 hearts and the Ace of Spades). This is called “Shooting the Moon,” and it will set your score to zero, adding 26 points to each of your opponents.

Once a player reaches 100 points, everybody counts the penalty cards in their tricks, and the player who has the least points wins. If two or more players have the same score, the game continues until only winner is left.

And that’s all there is to it when it comes to playing Hearts for beginners. If this sounds like your idea of fun, there are plenty of free Hearts simulators online for you to practice on.

Here are some you can try for free: Browser | Android | iPhone

Liked this article? Take a look at the latest in the gambling industry! Don’t embark on a gambling adventure without checking our guides. You can also follow our latest gambling tips and news on Twitter and Facebook.
Tag card games gambling guides hearts for beginners how to how to play hearts simple card games terms of hearts