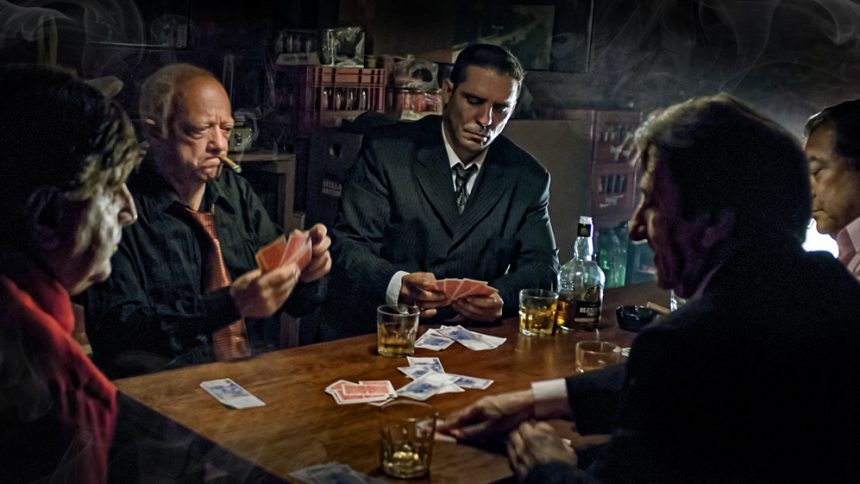 Poker has experienced a surge of popularity thanks to its guest appearance in popular culture, but what is the game exactly? How do you play it? Here is our poker for beginners guide:

Classic poker, sometimes called 5 draw poker, is a card game that is played in a group, where the object of the game is to beat the others players.

The aim is to win the pot containing the bets all the players have made in any one deal. Players make a bet either because he or she feels they have the best hand in the group or “bluff”, in which the player gives the others the impression that he or she has the best hand for strategic reasons.

The winner of each round comes down to who holds the best combination of five cards in the hand.

How to get started?

There can be any number of players in a poker game, but the ideal number ranges between 5 and 8. Poker is a game in which each player plays for him or herself and it’s also a game where skill is required. Unlike most casino games, poker is entirely down to observational skills and the ability to bluff and call others’ bluffs, and is not subject to blind probability like in other casino games, even though there is still an element of luck.

In a game of poker, one deck of a 52-deck of cards is used, but before the players are dealt the cards, the initial “ante” or “blinds” are paid. An “ante” is the starting bet each player must put into the pot before the game starts and is a predetermined value.

A “blind” is an alternative method, usually used in the Texas Hold’em variation of the game, but some standard games apply a blind pay-in system. Unlike the ante, the blind is only paid by the two players sat left of the dealer. The first pays a small blind, the second a big blind, which is often twice the value of the small blind.

Once all the antes and blinds have been paid, the dealer issues the cards, going round the group starting from his or her right, and the five cards are dealt facing down. There is also the option for players to change any cards in the draw round before another round of betting takes place.

The bets go round, and if there are no raises, then the player making the first bet can “check”, meaning they want to make no further bets and check the cards.

However, if a player has a good hand or wants to make the other players think he or she has a good hand then the player can “raise” the bet by a certain amount. Other players need to meet this bet to stay in the game otherwise they “fold”, meaning they lose what they have bet so far and do not show their cards.

The players still in the game and who have called “check” show their cards, and the player with the best hand wins the pot.

The basic rules of playing poker are not difficult, but in order to play well, it’s important that the player knows what hands are the most valuable. This allows the player to bet accordingly, if he or she is not bluffing. The order of the hand value is given in the table below, running from high to low from the top:

When you are dealt your hand, take a minute to evaluate how strong your hand is and bet accordingly. You can bet or raise even with a poor hand, but only if you want to call the other players’ “bluff”, however, this is more advanced poker play.

Becoming a good poker player takes time, and it’s not just about getting a lucky hand, but also about knowing how to bluff, when your face and expression give nothing away to the other players. It’s a tough skill to master, but here are some tips to play poker well.

Liked this article? Take a look at the latest in the gambling industry! Don’t embark on a gambling adventure without checking our guides. You can also follow our latest gambling tips and news on Twitter and Facebook.
Tag flush four of a kind full house how to play poker poker cards poker for beginners poker hands poker rules poker strategy texas hold'Em three of a kind