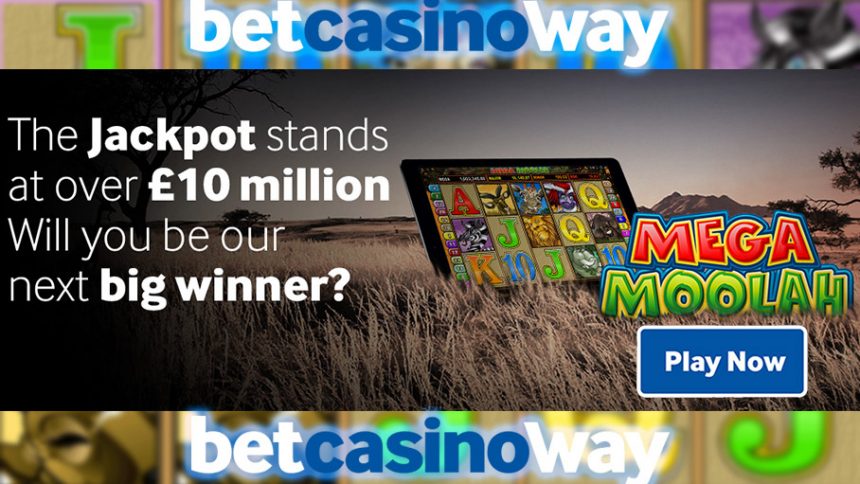 Win Over £10 Million with Mega Moolah Jackpot at Betway Casino

Join the fun at Betway Casino for a chance to win over a massive £10 million with the awesome Mega Moolah Jackpot!

There’s nothing like this in the whole industry at the moment, so don’t miss this amazing opportunity to win over £10 million with the 25-payline online slot. When you’re playing make sure you collect the monkey and lion symbols, as those are scatters and wilds respectively. The minimum bet that you can place on this online slot is €0.25, but we advise you to make bigger bets of €6.25 to have a higher chance of success! (Check out the Mega Moolah Slot Review for extra details about the cool game.)

This is not the first time that Betway Casino is offering a massive jackpot on the Mega Moolah slot. (For more info about the online casino, check out Gambling Herald’s Betway Casino Review.) Last year, in October, UK Betway player Jonathon Heywood won a jaw-dropping record of £13,213,838.68 with the Mega Moolah Jackpot! This was equivalent to €17,879,645.12 at the time of the win, which basically made it the biggest-ever win with an online slot.

Jonathon is a 26-year-old who hails from Cheshire, UK. When he won the staggering amount, he said, “it’s all so surreal, and I can’t come to terms with it just yet, I just kept staring at my screen and seeing this huge number in my Betway account.” Betway’s spokesman, Alan Alger, then commented, “We are delighted for Jonathon and having met him the day after his win we can honestly say that it couldn’t happen to a nicer young man. We hope he really enjoys the World Record win.”

Microgaming CEO, Roger Raatgever, stressed that they have set countless records with their progressive jackpots since the late 1990s, and to date they’ve paid out winnings in excess of €500 million! (Jonathon’s Mega Moolah Jackpot win in late 2015 was the biggest payout to date.)