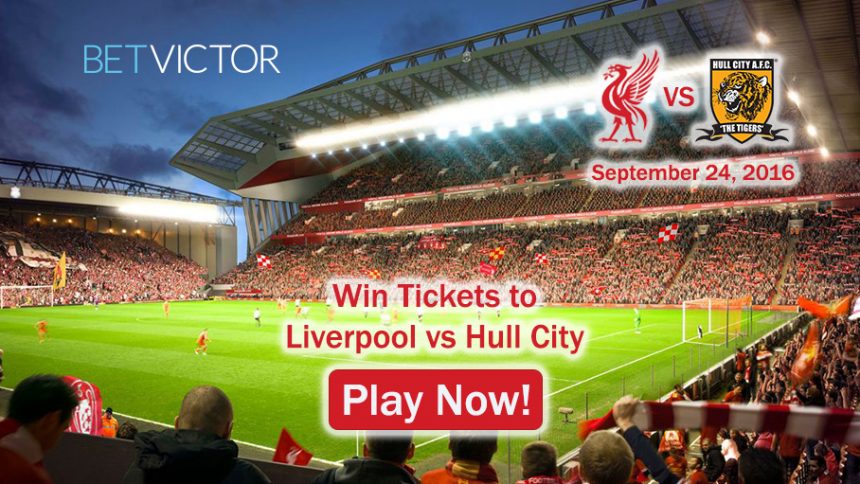 Join BetVictor Casino now and win football tickets to Anfield for match-day 6 of the Premier League: Liverpool vs Hull City!

Play some of the best casino games, scoop tons of money and also win football tickets to the game between the Reds and the Tigers on September 24. To witness the upcoming match on Anfield’s expanded main stand, all you have to do is wager at least £10 on any of the casino games, and you’ll be awarded 1 entry into the prize draw to win football tickets. Remember, the more you wager, the higher your chances are of visiting the new main stand at Anfield.

Note: Poker games do not count towards the promo, only casino games.

There are a total of five pairs of ticket up for grabs, so a total of 10 lucky winners will have the chance to support the Reds, thanks to partnership Liverpool FC and BetVictor enjoy. And that’s not all! You’ll also receive £200 in spending money, so you’ll be able to enjoy all the amenities Anfield has to offer at BetVictor’s expense.

Note: this offer is open to residents from the UK and the Republic of Ireland.

Win football tickets to the game before some other supporter snaps them up by playing some of the most thrilling casino games now! This offer is open until September 11, so make sure to wager £10 (or more) on BetVictor casino games before it expires.

Liverpool have made a slow start to the new camping, but they’ll be aiming to find their form by the time they face Hull City in round 6 of the English top flight. Currently, Jurgen Klopp’s men sit in 11th position with 4 points, after recording a 1:1 draw with Tottenham, a 2:0 loss to Burnley and a thrilling 4:3 victory against Arsenal.

The club has recently completed Anfield’s long-planned expansion, which saw the capacity increase from 45,500 to an impressive 54,000. With an additional 8,500 Reds supporters at the stands backing the men on the pitch, Liverpool could see their fortunes overturn as they aim to capture their first league title since 1990.

Earn yourself an entry to the draw to win football tickets for a mere £10 on casino games now!