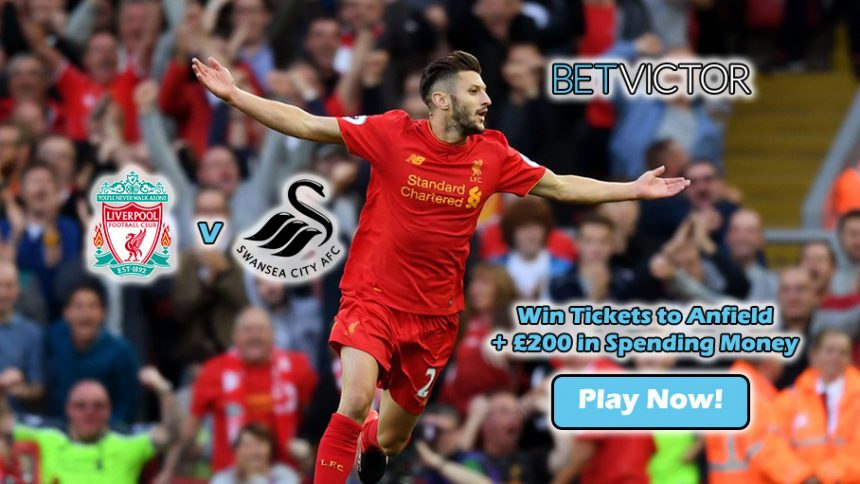 Play the exclusive Liverpool FC slot for a chance to Win Football Tickets for round 22 in the Premier League!

Ever wondered what the view is like from the top tier of Anfield’s expanded main stand? Win Football Tickets to Liverpool v Swansea match and you’ll get to experience the action live.

Every £10 that you wager on the Liverpool FC slot will see you get on entry to the draw that gives out 2 tickets (5x) to the Liverpool v Swansea encounter at Anfield on January 21. Win Football Tickets by collecting as many draw entries as you can until January 10 to have a better chance of winning the special giveaway.

On top of that, BetVictor Casino will also give you pocket money of £200 to spend on whatever you like on matchday, so you’ll be well taken care of. You can buy an official shirt and other Liverpool-branded items from the fanshop and still have plenty of money to spend on that day.

Jurgen Klopp’s men sit in second position on the table with 44 points (as of January 5), right behind leaders Chelsea, who are still five points away at the top. But considering the way the German boss has shaped the squad this campaign (his first full season), Liverpool could very well lift the title this season for the first time since 1990. Chelsea could still drop a few points along the way, which could result in a two-way battle between for the Premier League crown.

Join BetVictor Casino today and start collecting ticket entries to the draw before anyone else; despite the increased capacity at Anfield from this season, there are limited seats available and this a limited time offer, so make sure to hurry up before time runs out.

Simply make £10 deposits on the Liverpool FC slot to Win Football Tickets to one of the best grounds in England for the Liverpool v Swansea match on January 21.