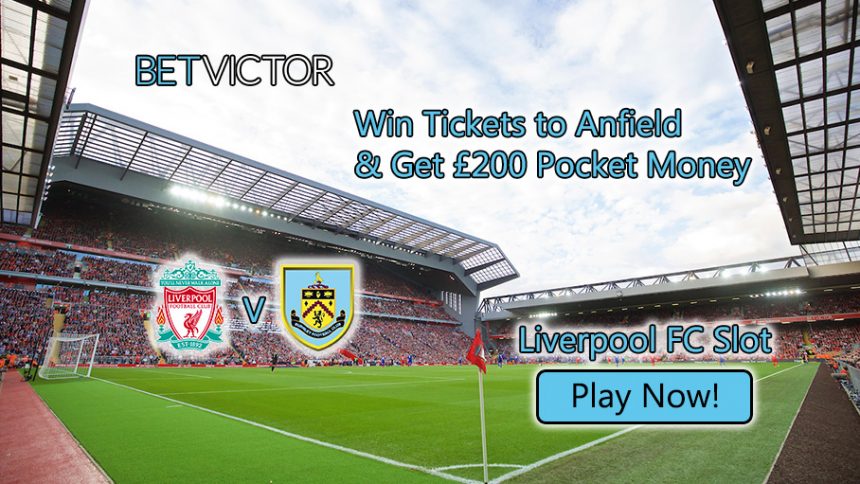 Show your support from the new main stand at Anfield for Liverpool v Burnley match by winning football tickets with BetVictor Casino.

Win two tickets for Anfield on March 12 that will see the Reds host Sean Dyche and his men for round 28 of the Premier League. BetVictor Casino is giving out a total of 10 tickets (5x pairs) for the Liverpool v Burnley match at Anfield, and all you have to do is play the Liverpool FC slot to qualify for the Casino Giveaway.

As an added bonus to the Liverpool v Burnley tickets, you’ll also get £200 in spending money from the online casino, so you won’t have to waste any of your own money while witnessing the action unfold right in front of your eyes on March 12.

For every £10 that you play on the Liverpool FC slot from now until 23:59 GMT+1 on March 5, you’ll receive one entry to the prize draw that could take you to the Liverpool v Burnley encounter at Anfield and also see you collect £200 in pocket money. The more you play, the higher your chances are of grabbing two tickets to the football action, so bet big and bet often. After the campaign is over, check back on March 6 to see if you’ve won the prize draw that will take you to Anfield for the Liverpool v Burnley clash.

BetVictor is the official betting partner of Liverpool, so make sure to use this opportunity to place a few wagers with the online sportsbook. Enjoy a range of specialized odds for the Reds and other sides in both the English top flight and other leagues abroad.

Jurgen Klopp’s men started off the season with in fine form, which soon saw them become one of the main title challengers. However, over time Liverpool has suffered a drop in form, which now seems them occupy 5th position on the Premier League table, having accumulated 49 points after 26 rounds.

Over the last five matches, the Reds have managed to clinch only one victory, while the other encounters ended with one draw and three losses – their last game, against Leicester away, resulted in a 3-1 loss. The German boss will have to come up with an effective plan soon, if he wants to compete in the Champions League next season, as the likes of Chelsea, Tottenham, Man City and Arsenal currently sit above them on the table.

Join BetVictor Casino today and start wagering on the Liverpool FC slot to receive tons of entries to the prize for the Liverpool v Burnley match!