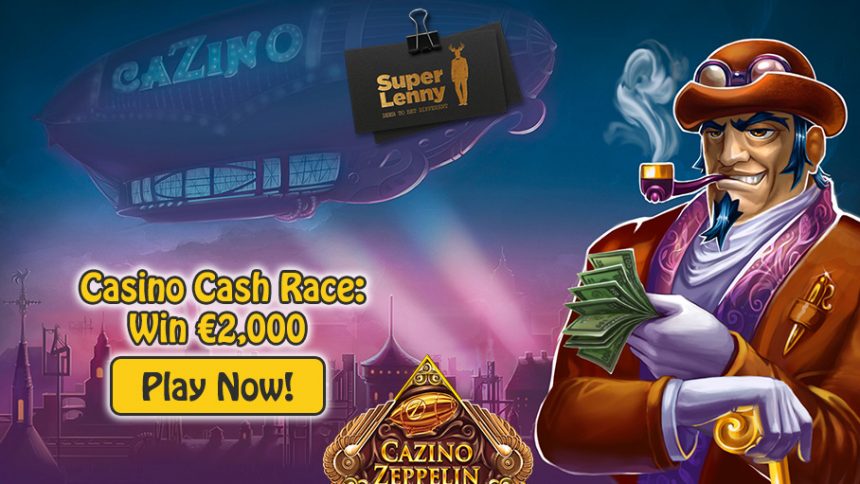 Grab up to €2,000 on Cazino Zeppelin Slot with SuperLenny Casino Cash Race

Join the fun this Friday with the Casino Cash Race Tourney on the iconic Cazino Zeppelin slot for a shot at earning some big weekend money!

Have you ever played the fantastically amazing Cazino Zeppelin slot? Well, not only does SuperLenny Casino give you the chance to do so, but there’s also up to €2,000 in Cash Prizes up for grabs for the best players during this Friday’s Online Slot Tournament.

You’ll receive your prizes randomly throughout Friday’s campaign that runs from 16:00 CET until 22:00 CET; a total of 30 rewards will be handed out to the lucky winners of the Casino Cash Race. Be the best you can be to grab yourself the Cash Drops during these four hours to kick off the weekend fun with a bang! The greatest thing about the Online Slot Tourney is that your share of the €2,000 Cash Prizes will be credited to your account instantly, so you don’t have to wait to see your Cash Winnings on the Cazino Zeppelin slot.

(To learn more about the online casino, check out SuperLenny Casino Review.)

Cazino Zeppelin slot – developed by the popular Yggdrasil software – features 20 paylines across 5 reels, thus giving you ample opportunities to maximize your earnings through the Casino Cash Race Tourney. There are loads of cool options and special features that will see you collect tons of rewards as you play between 16:00 – 22:00 CET this Friday.

The whole theme of Cazino Zeppelin slot revolves around the ‘zeppelin’ as you might have guessed from the name, and there are loads of interesting characters that make the online slot come alive. TIP: you should aim to get the icons that feature poker players on them, as these ones are the most rewarding of symbols. The big boss (the one with the cash, cane and hat) gives out the biggest prizes, so watch out for him; collect his symbols on the reels to win 2,000 coins on a full payline.

Come back next week and every Friday after that to play SuperLenny Casino Cash Race, in case you find yourself unable to join the thrilling party this Friday, on the awesome Cazino Zeppelin slot.

Celebrate the start of the weekend in style with SuperLenny Casino Cash Race that yields up to a staggering €2,000 in Cash Prizes on the Cazino Zeppelin slot. We bet you’ll have a blast with that kind of money in your pocket as you’re swinging from bar to bar, sipping on Hennessy and puffing on that €200 Cohiba!

Join now for a chance to win up to €2,000 with SuperLenny Casino Cash Race!